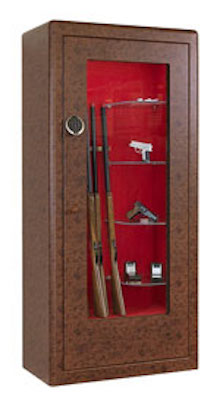 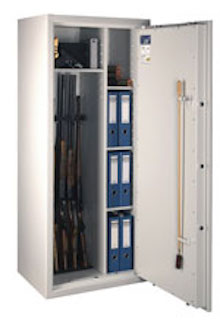 Frankfurt/M.  March 2017. If firearms get into the wrong hands, it can become dangerous. Oftentimes, a proper and professional storage of weapons and ammunition can already prevent worse. Motivated by recent events, German politicians have now reacted with a new draft law for amendments of the Weapons Act. Due to the special urgency presented by the federal government, a final decision is to be expected before the summer break.
The new draft law for the Weapons Act contains major changes concerning different sections of the German law. Comprehensive new regulations will also apply to the storage of firearms and ammunition. The draft stipulates that firearms whose purchase and possession are subject to authorization are to be kept uncharged in cabinets which comply at least with the EN 1143-1 standard and which are certified by an accredited certification body. Furthermore, the requirements for the weight and resistance of the safes have been revised.

The entry into force of these amendments will result in the fact that the steel cabinets currently being approved by the Weapons and Ammunition Weapons Ordinance, which are constructed in accordance with VDMA Specification 24992, would be outdated and could no longer be marketed as weapon cabinets in Germany. Weapon cabinets in accordance with the VDMA Specification 24992, which are already in use, there will be the right of continuance, so that they can be used for the next 60 years. However, the safety level of these steel cabinets has already been questioned for a long period of time. Even in 2003, the requirements of the standard sheet no longer corresponded to the state of the art. For safety reasons it was therefore withdrawn by the German Mechanical Engineering Industry Association (VDMA).

ESSA, the International Security Systems Association, also welcomes the proposed changes for weapon owners. For several years, the association has pointed out that weapon cabinets built according to the VDMA Specification 24992 do not correspond to the current state of the art and offer insufficient security. Nevertheless, weapon owners should only see the weapon cabinets specified in the Weapons Act as the minimum security level - a higher level of resistance is always advisable.

Whatever the final decision of the German Bundestag and the Federal Council might be, weapon owners must be aware of the responsibility they have towards themselves and their environment. Investing in a secure weapon cabinet is therefore the first step in protecting yourself against potential criminals and minimizing the risk of theft.