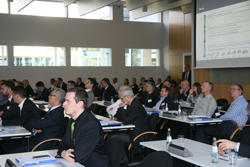 Caption:
Nearly 140 security experts from all over the world attended the ESSA General Assembly. 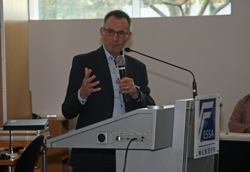 Caption:
Wolfgang Bruna received the ESSA International Leadership Award 2019 for his more than 20 years of commitment to cross-industry security standards at the European level.

Nearly 140 members discuss seucirty aspects of secure storage units / New tool list of the new standard EN 1143-1, the future of cash and some potential dangers of older safes in focus

Frankfurt, 3 December 2019  When the European Security Systems Association (ESSA) invites its members to its general assembly, then there is no way too far: Nearly 140 experts from the entire physical security industry travelled from New Zealand, China, India, Brazil, the USA and many European countries to Frankfurt on 13 and 14 November 2019. These included leading manufacturers and suppliers of safes and solutions for strongrooms as well as insurance and government representatives.
Programme highlights included a lecture on the future of cash, a workshop on the European standard EN 1143-1:2019 for safes, ATM safes, strongroom doors and walls, which has been in force since April 2019, and a lecture on possible pollutants in safes built years ago.
Cash remains an important means of payment
As leading engineer of KBA-NotaSys, a top manufacturer of printing presses and security solutions for banknotes and securities, Johannes Schaede has been keeping a close eye on the market for decades. The expert is not afraid of an end to banknote printing, despite the trend towards cashless, often smartphone payments. "Indeed the production of banknotes is increasing in nine of the ten largest markets. In 2023 it will be five to seven percent higher than ten years earlier," he reported.
The expert had several positive messages for the present manufacturers of ATM safes or safes for private and commercial users. The trend towards negative interest rates as well as the growing need for privacy in the digital world tends to result in more cash use, especially since every card payment leaves data traces. In addition, for millions of people worldwide who do not have an account, cash is the central access to economic life.
Preparing safes for the technical progress of burglary tools
The workshop on EN 1143-1:2019 showed that since its publication in April 2019, the industry has only cautiously approached the new regulation. This applies in particular to the optional T2-toolset contained in the new regulation. Tools, which safes as well as doors and walls of strongrooms are to withstand as long as possible in destructive tests, were adapted to the current state of the art for this list.
Dirk Etheber, certification engineer of the European Certification Body GmbH, dared to make first assessments of the influence of these more powerful tools on future tests and their results. Electric cutting tools, hammer drills, concrete chain saws and thermal lances, some of which have significantly more penetrating power than the previously binding T1 tool set, will present engineers with challenges. However, because the use of the T2 tool set is optional even from the point of view of insurers, manufacturers are hesitant. "It is not clear when the first safes and strongroom solutions will be launched on the market for which the T2 tool set will be used for certification," he explained.
Sensitize customers to the benefits of stricter certification
During the workshop, only representatives of testing laboratories indicated that they were increasingly concerned with the new tool set. Manufacturers, on the other hand, kept a low profile. They face a dilemma. As long as customers do not demand stricter certification - and often do not even know of the new tool set`s existence, and as long as insurers do not insist on its use, it is unclear whether investments in reinforced or newly designed safes and vaults or additional certification costs will pay off.
"We must sensitize customers to the fact that more effective tools are available to burglars today - and therefore the testing and certification of safes and strongroom solutions must be adapted to the state of the art in order to achieve maximum security," explains Dr. Markus Heering, ESSA`s Managing Director. Otherwise, the market would hardly reward the increased development and production efforts.
Etheber referred to considerable differences in performance between the existing and the new tools. In particular, the now approved concrete chain saws with up to 11,000 watts of power and thermal lances, which burn through almost any material with oxygen flames - and which can now be twice as thick as before (13 mm instead of 6.5 mm) for the same length (1200 mm) - present designers with great challenges in his estimation. Because Burglars can reach their aims faster than before, even with wall thicknesses of around 70 mm or with walls consisting of material sandwiches. "In order to protect safes against this, manufacturers must come up with some ideas straight away," he warned.
An award and a warning of older safes
During the general assembly Wolfgang Bruna, engineer at Wertheim Safes, received the ESSA International Leadership Awards 2019 for his more than 20 years of commitment to cross-industry security standards at the European level. In the context of this work, Bruna's constructive, non-partisan leadership approach, which is always based on sound technical arguments, is absolutely convincing, Heering said in his laudatory speech.
Finally, ESSA`s deputy managing director, Falko Adomat, used the forum to sensitize the members from all over the world to potential health risks when dealing with safes of older construction years. Even in certified safes, manufacturers used asbestos for fire protection purposes in some countries until the early 1990s. Mostly in door seals and walls. Anyone restoring, modernising or dismantling such safes would have to reckon with this danger - and take appropriate precautions.
This applies even more to products without certification and to historical safes. In former times, some manufacturers used to introduce even toxic chemicals or explosive substances, to increase the deterrent for burglars. "Such dangers can only be expected in exceptional cases; but anyone who has to deal with very old safes should consider them," said Adomat. On the other hand, he gave the all-clear for modern certified safes and strongroom solutions: "Such health hazards no longer emanate from today's products in our industry," he stressed.
Text: 6.035 characters incl. spaces
As of: 3 December 2019