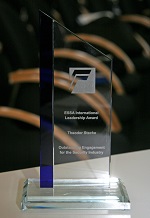 Bildunterschrift:
Photo 244 - The ESSA International Leadership Award will continue to be presented at the Annual General Assembly. In the future, the award is intended to honor the personalities of the association, who have made a special contribution within the industry due to their extraordinary commitment. 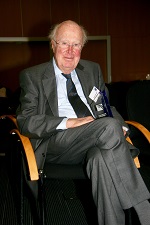 Bildunterschrift:
Photo 246 - For the first time, the ESSA International Leadership Award was presented this year. For his many years of commitment Theodor Stacke was honored.

Frankfurt/M.  November 2017. On November 9, 2017, the annual General Assembly of the European Security Systems Association (ESSA) was held in Frankfurt am Main. 141 representatives of the international security industry came together to not only review the activities of the last year. Rather, the jubilee year was a welcome occasion to bring back the history of the association, the people behind the achievements and the accomplishments of half a century.

The 2017 General Assembly was moderated by the chairman of the board Harald Lüling (BURG-WÄCHTER KG) and the deputy chairman Myriam Bevillon (Gunnebo AB). "Our association has grown to 137 member companies since the fall of 1967 and with the high personal commitment of all our members, we are working hard to advance and continually improve the market of physical security" says Dr. Markus Heering, Managing Director of ESSA. This dynamic within the association reflects the dynamics in the market. The European Security Systems Association has proven itself as independent representors of interests and as an established platform for the professional exchange of manufacturers, dealers, insurance companies and authorities in the field of the physical security industry. ESSA continues to be fully committed to identify the prevalent restrictions on the international market of physical security. It is our main task to support our members in recognizing and overcoming market barriers, he said.

Mrs. Pettersson presented the current status of the "HECTOS" project, a project funded by the EC FP7 security research program that brings together eight leading organizations from across Europe in order to develop a consistent approach to testing and certification of physical security products. The project was already presented at last years General Assembly when it was still in the starting blocks. The project, which is based on the ISO / IEC 17000 series, is already in the final stages of concept development. In January 2018, the finalized concept will be presented.

security essen has once again underlined its position as the world's leading trade fair for civil security: 1,040 companies from 45 nations redefined the standard of civil security at Messe Essen for four days. They presented innovative products and services ranging from intelligent video surveillance to the protection of real estate and companies to protected data transport to over 40,000 trade visitors from 119 nations. In the future, Security will be divided into six overarching theme worlds: Services in Hall 1; Access, mechanics and systems in Halls 2, 3 and Galeria; Video in Halls 4 and 5; Brand, burglary and systems in halls 6 and 7, perimeter in hall 7 as well as cyber security and economic protection in hall 8. The security essen 2018 will take place on a completely modernized fair site, which will set new standards with the end of work in 2019. Short distances, eight spacious, single-storey halls and plenty of natural light will in future provide perfect conditions.

There was a lively exchange among members on the subject of anchoring. Dr. Küenzlen reported to what extent the dowel technique contributes to this. Various possibilities of anchoring were presented, ranging from the safety cabinet in apartments up to the bank vault. The weak point is not the certified vault, but the other connecting elements. Therefore, it is advisable to check the conditions on site, even before buying the safe. In order to withstand high pull-out forces, the anchoring should be done in solid concrete and a suitable dowel should be selected.

For the first time, the ESSA International Leadership Award was granted this year. In the future, the award is intended to honor the personalities of the association, who have made a special contribution to the continuous development of the industry due to their extraordinary commitment. "In close cooperation with our member companies, we often experience extraordinary commitment, which we would like to highlight with the ESSA International Leadership Award," says Harald Lüling, CEO of ESSA. The 50th anniversary provided the perfect setting to award the first ESSA International Leadership Award to Theodor Stacke. The Stacke GmbH  wrapped around Theodor Stacke  was not only one of the eight founding members of the Forschungs- und Prüfgemeinschaft Geldschränke und Tresoranlagen e.V. (later: ESSA). Rather, under his leadership in the association, the old quality conditions (RAL) were prepared and implemented and still form the basis for all quality standards in todays industry. He also played a key role in the development of the first testing and certification system, which provided the basis for numerous German  but also European  innovations and was one of the most important cornerstones for the development of standards as we know them today. "We are very pleased that the award is so well received by all our member companies. We are already looking forward to next year's submissions", says Myriam Bevillon, vice-chair of ESSA.