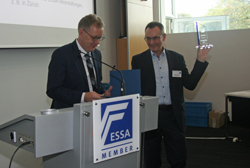 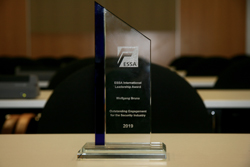 Frankfurt, 28. November 2019  Since 1977 Wolfgang Bruna has been designing safes for his employer Wertheim in Guntramsdorf near Vienna. For more than two decades, he is committed to high manufacturer-independent security standards at European level - and has since missed only one of dozens of working group meetings. Now, since 14 November 2019, he is the laureate of the ESSA International Leadership Award 2019. The European Security Systems Association (ESSA) e.V. awards the prize annually to personalities who make a special contribution to the further development of the industry through their extraordinary commitment.
Bruna has dedicated his entire professional life to safes and their security. During the award ceremony at the ESSA general meeting in 2019, he explained what drives him: "Safes are circulating in my veins".
Striving for the best solution for the entire industry
In his laudation, ESSA Managing Director Dr. Markus Heering emphasized Bruna's constructive leadership approach. "What we appreciate so much about Wolfgang Bruna is that he always argues on a sound technical basis, often taking a step back from his own interests - and that his calm, patient manner does not let up until the best standardization solution for the entire industry has been found," Heering explained. For instance, the awardee has been patiently working for two decades, to adapt the tool list for destructive security testing of safes and strongrooms to the current state of the art. This perseverance was probably also connected with Bruna's hobby: The passionate runner has completed various marathons.
Standards create room for creativity
Bruna has been a member of the board of the European Security Systems Association since 2009. In his acceptance speech, he reported on how European standardisation has changed his professional life. When he started his career, rigid technical rules deprived any freedom and creativity of safe-designers. This changed with the agreement of binding, manufacturer-independent standards that opened up room for different safe designs. In the standardization committees, however, he achieved more: "I learned there how to argue with commitment but always fair and respectfully. Over the years, we have had many hot discussions. But despite all the differences of opinion, the tone was never rude or hurtful," he emphasized. This way of dealing helped him in his daily work. "In addition to the gain in creativity in safe design, for me this is the most important effect of my involvement in the standardization committees," Bruna explained. The positive, fair treatment of each other distinguishes the ESSA - and it is radiating to the entire industry.
Text: 2660 characters incl. spaces
As of: 28 November 2019